Last Saturday Lucia and I went for a day out walking along the cliffs of Holy Island on Anglesey. As were were going to be passing one of the North Wests top mackerel marks, a travel rod and feathers were added to our daysack. For those of you who fancy giving this place a try - its OS grid reference is 224 793. 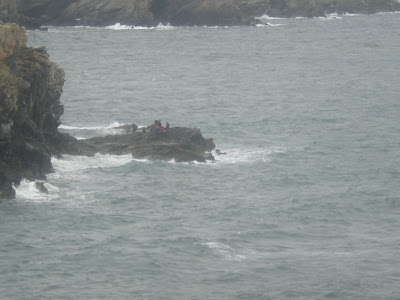 I didnt fancy joining the scrum on the rock - wasnt too sure that its a safe place to fish on a high tide!

Our timing was a little off, and our walk from Trearddur Bay to South Stack Lighthouse coincided with a high tide. Normally a high tide is a good thing as it brings the fish slightly closer to shore, however a high tide combined with a reasonable swell and a strong breeze isn't a safe combination when fishing on an exposed rock mark such as Mackerel Rock.

With only an hour or so available for fishing (whilst Lucia ate her lunch and read a magazine) I choose to fish a much safer mark about 500yds further along the coast. No mackerel - but a nice pollack decided to take my feathers. Later in the afternoon we headed off to fish Holyhead Breakwater for an hour or so before driving home - as the tide was at its lowest I was surprised when a nice mackerel took the lure I was using. I just didn't expect a mackerel to be feeding at low water.
Shows how much i know about sea fishing. 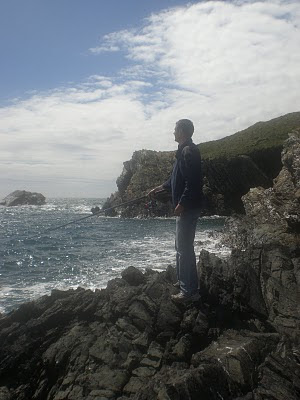 Sunday saw me on the banks of the Ribble with Tony. Standard tactics of 5bb stick float, maggots and centre pin reel saw me catch a number of dace to about 6oz, small trout, a nice chub and a couple of surprise roach. I've never caught roach so far up river before. Its reassuring that there are so many smaller roach and dace in the river, hopefully these fish will grow on and become the 1lb and 2lbers of the future.
I just love my time on the banks of the Ribble, its an amazing place to spend a few hours. Sunday saw us catching lots of fish, we saw a Stag and Doe come down to take an evening drink from the river, and Salmon and Sea Trout were leaping clear of the water on a regular basis. Its a privilege to be able to observe natures wheel turning.